Figures ESM1. Examples of simulations. In the first panel are reported p(Ea), s,

multiplied by 100 for graphical purposes. Fitness declines with increasing distance between value of the quantitative trait and environmental optimum. Population size is reported after mortality (which includes base mortality, selection, mortality induced by point extreme if occurs). Vertical segments in the population size panel identify the occurrence of point extreme events. The last panel represent values of the optimum. Black points and black line are values of

. Red dashed line is the mean value of the distribution of The text extinct” is added in the population panel when the population went extinct. A clear phenotypic lag is observed the 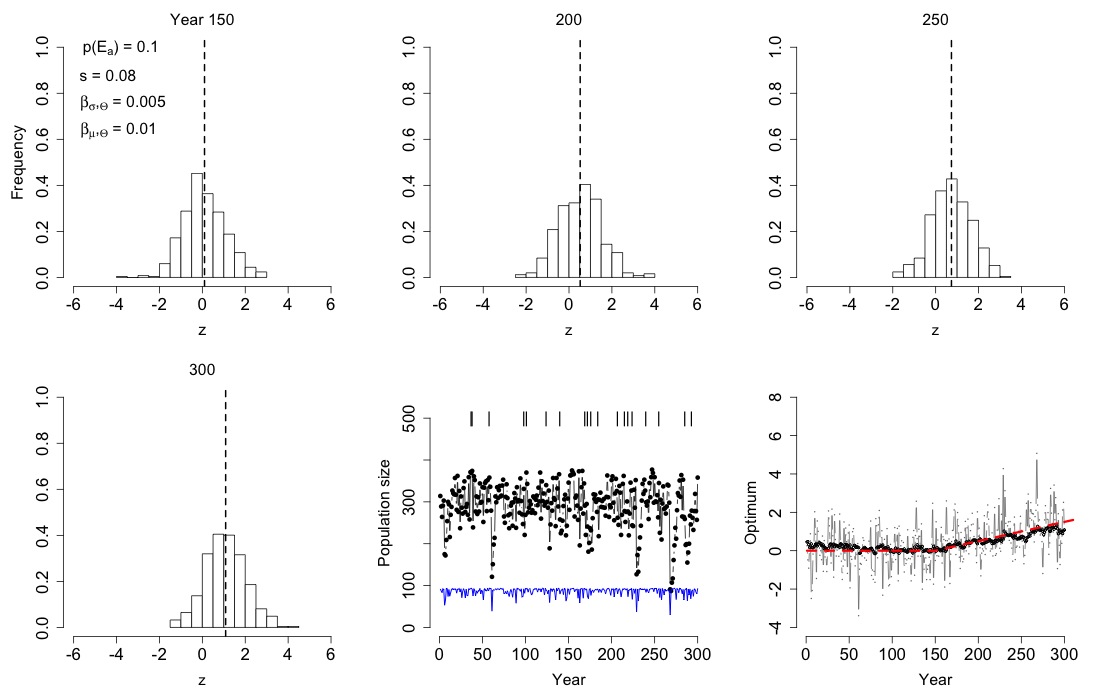 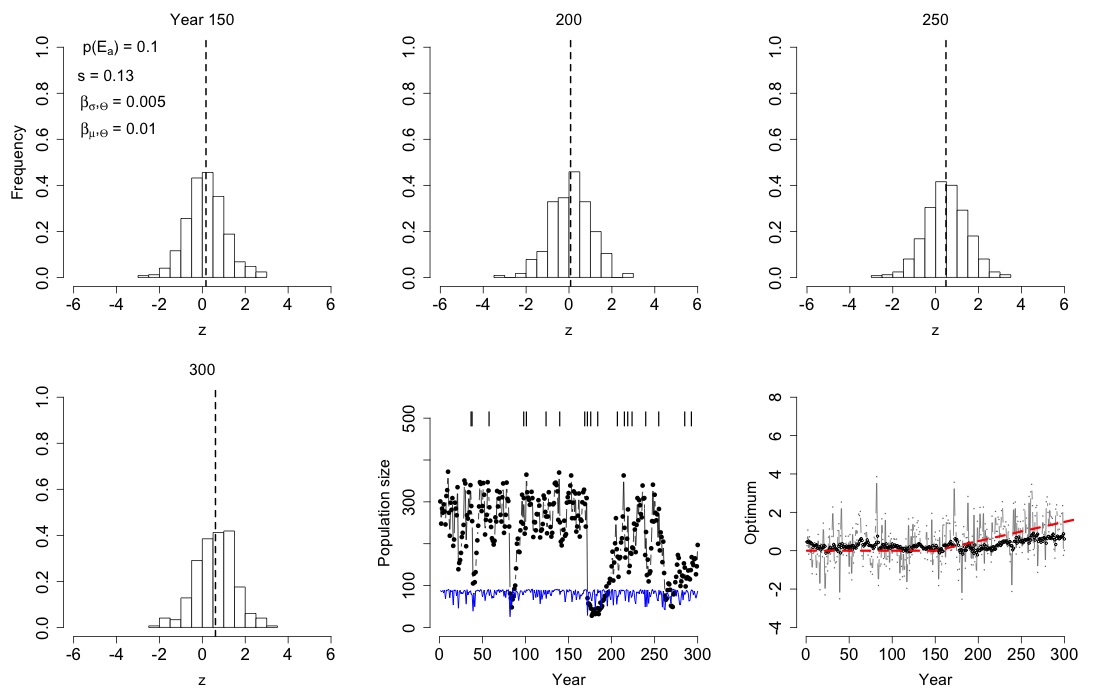 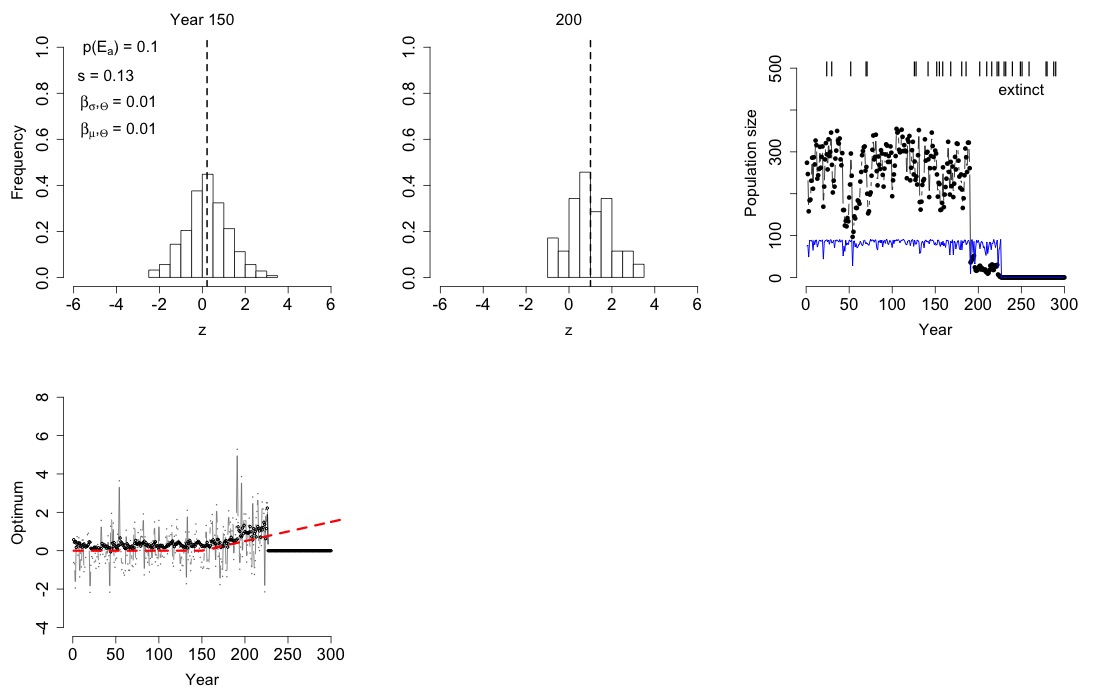 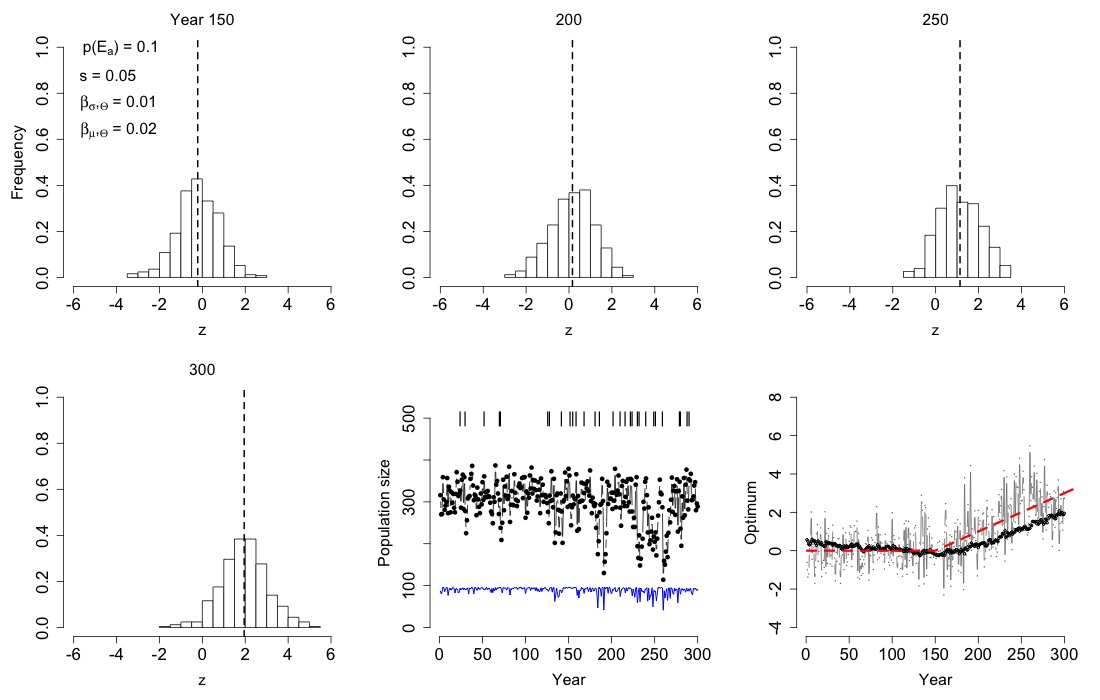 Figures ESM2. Lines of equal probability of extinction (number of populations going extinct divided by the number of replicates) in the mutation–selection plane for probability of point extremes p(EI,a) = 5, 7.5, 10, 12.5 10-1 and the four scenarios of increasing variability over simulation time of the optimum phenotype  ( 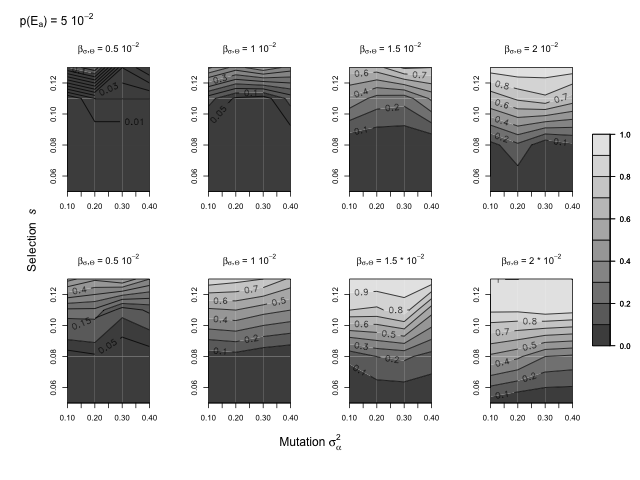 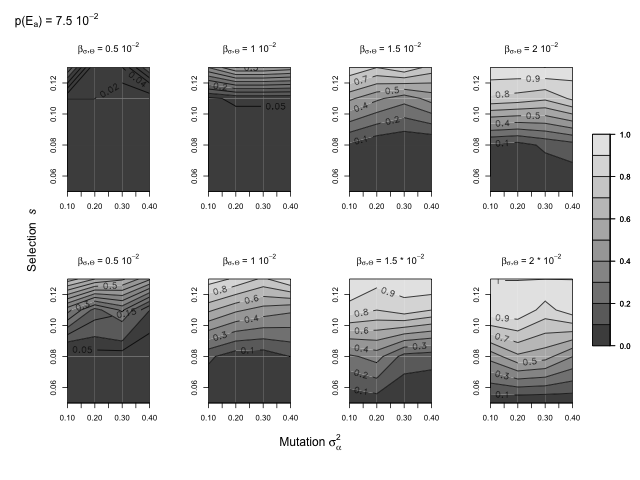 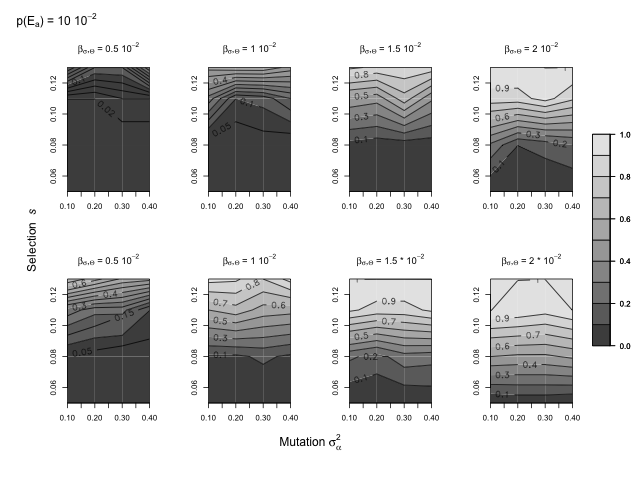 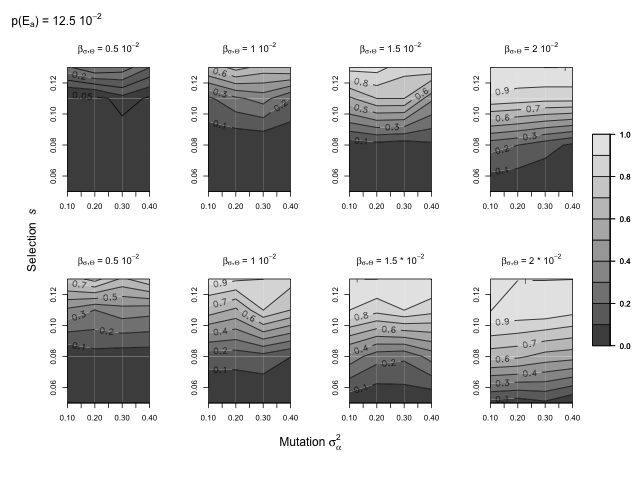 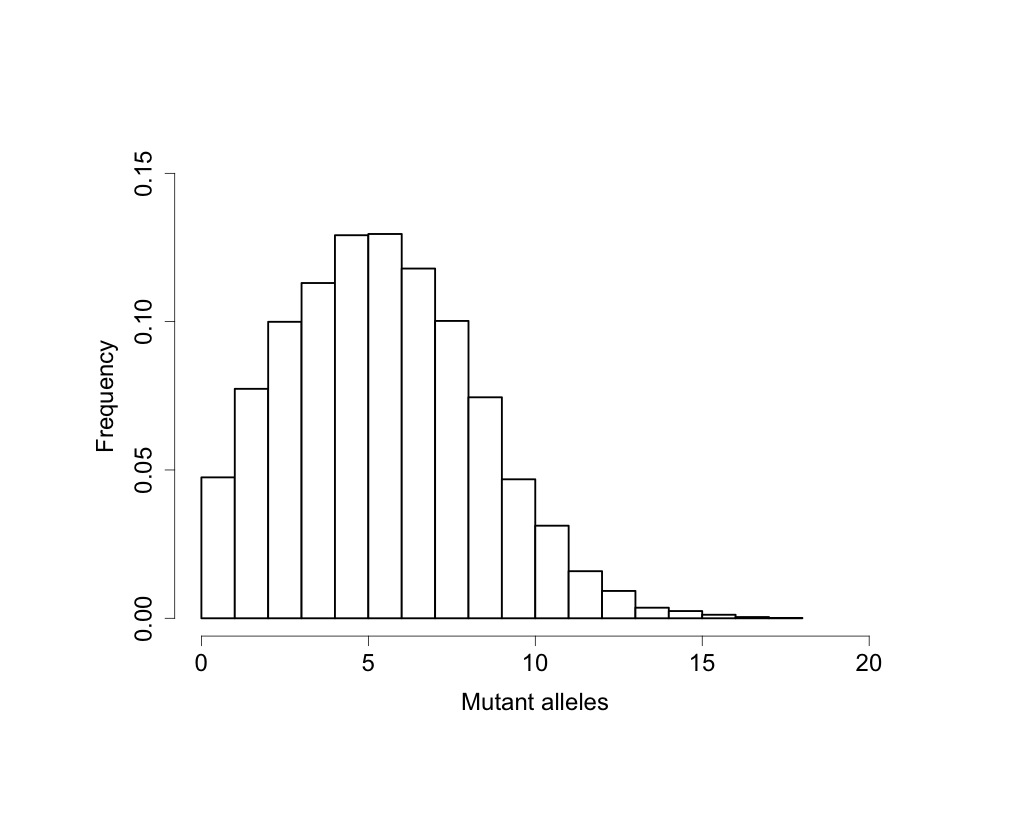 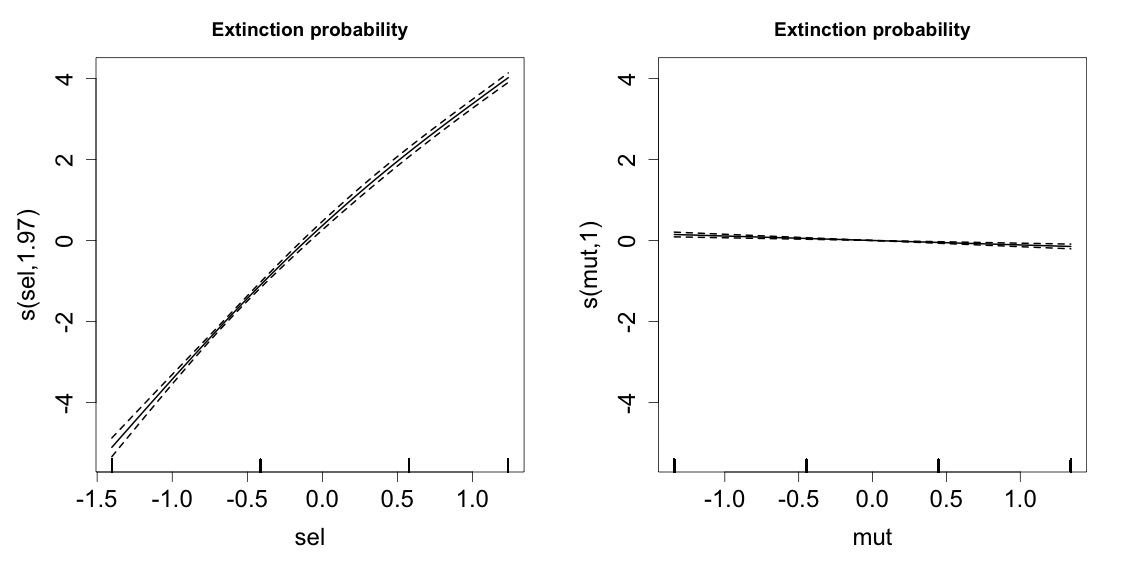 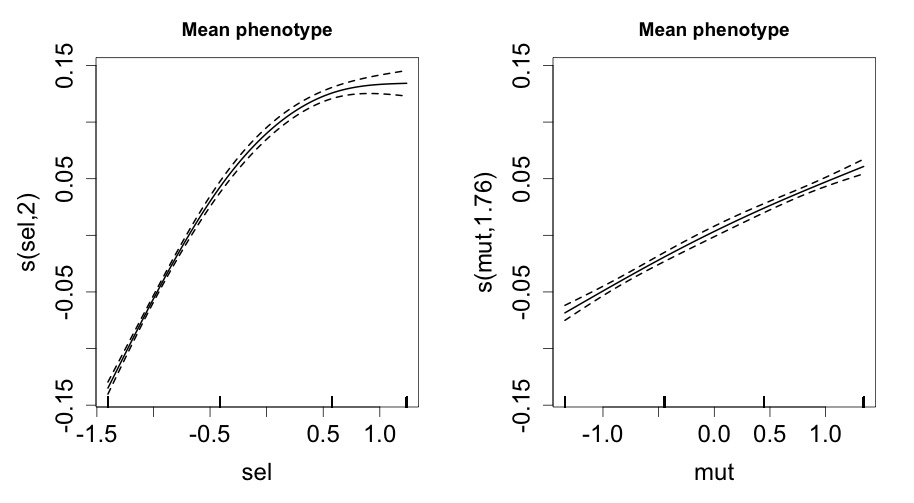 Figure ESM6. Smooth terms for mean phenotype at the end of simulation time for the populations that persisted for selection strength (sel) and mutation amplitude (mut). Number within parentheses represent estimated degrees of freedom.

Figure ESM7. Mean in the last 10 years of simulation time of the mean value of the phenotype in the population 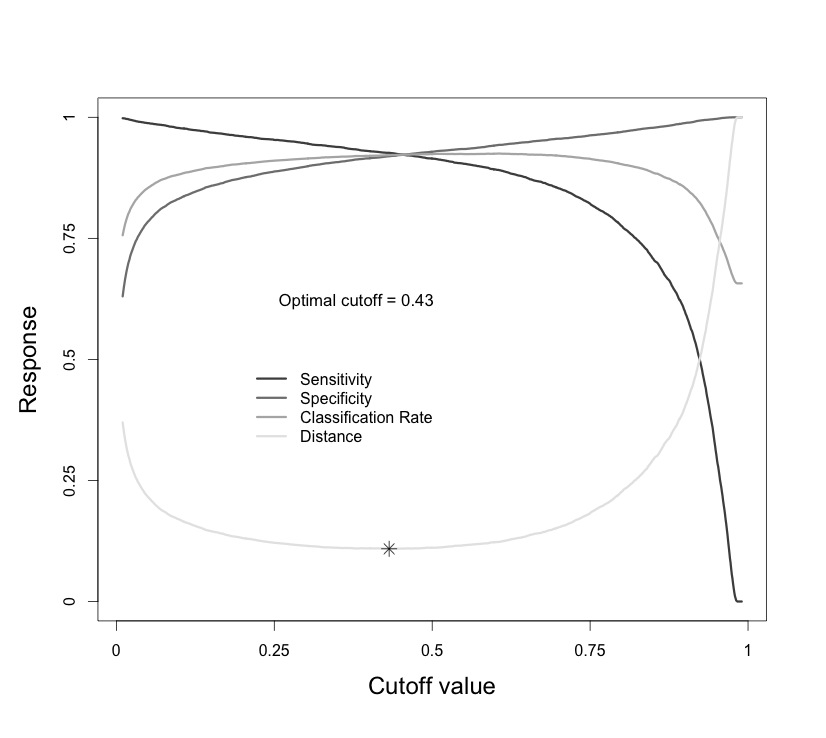 ) for the full GLM model (i.e., no mean population size in the “sampling window”) with extinction or persistence in the “extinction window” as response variable . The optimal cutoff identified by the star symbol corresponds to min(distance). 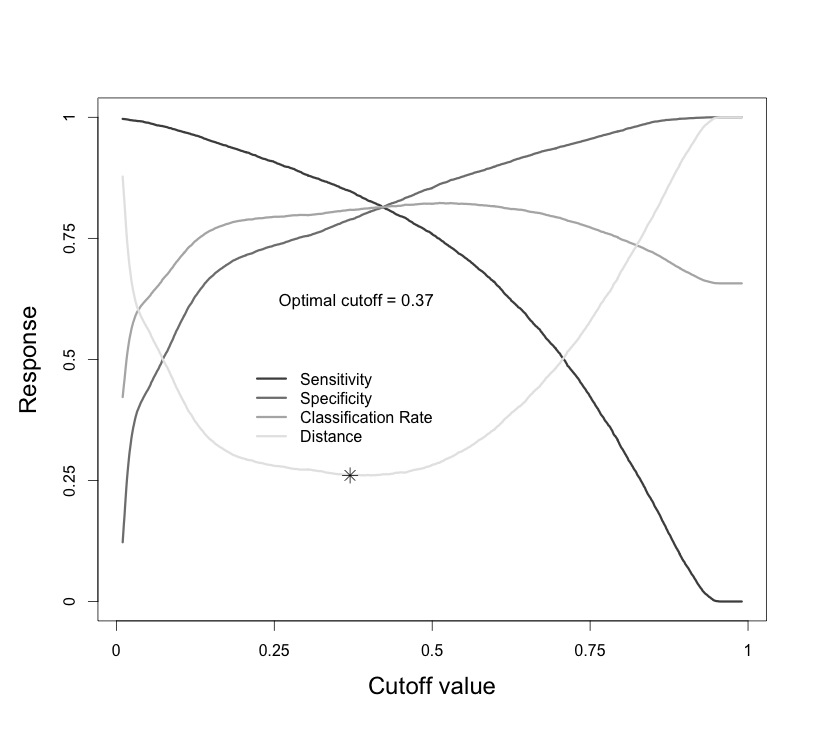 ) for the reduced GLM model (i.e., no mean population size in the “sampling window”) with extinction or persistence in the “extinction window” as response variable . The optimal cutoff identified by the star symbol corresponds to min(distance). 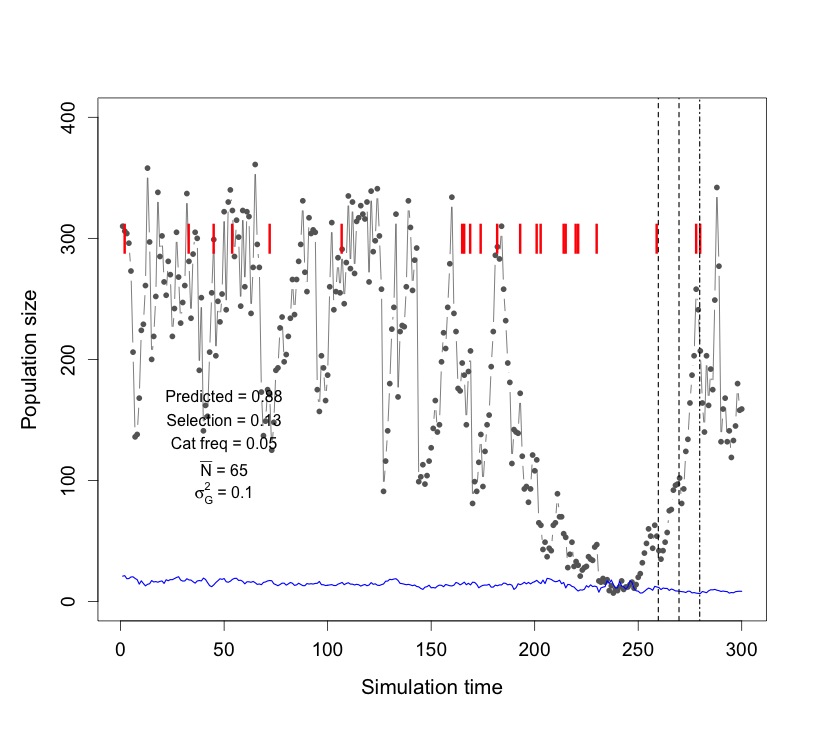 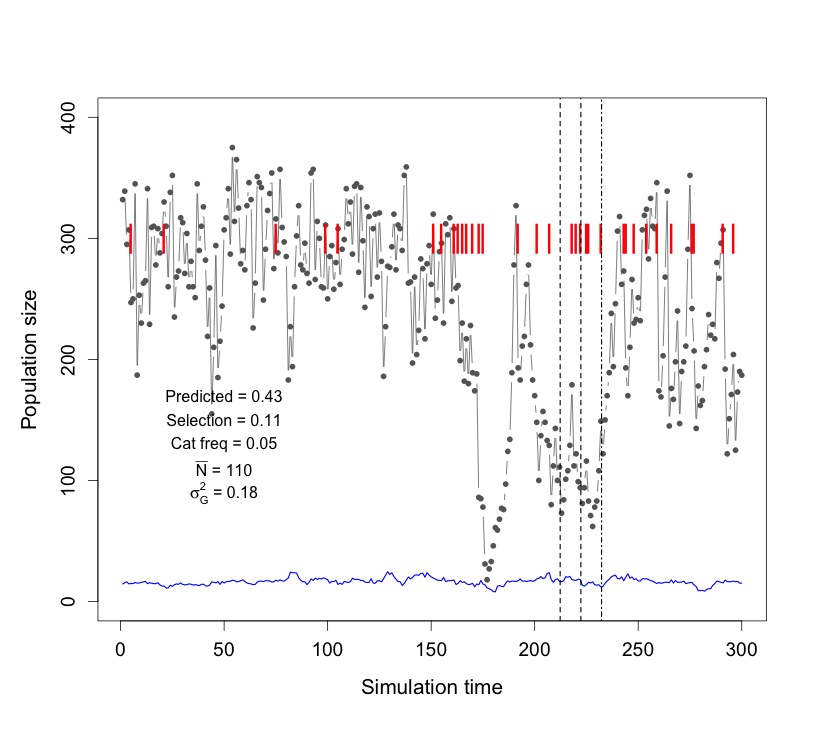 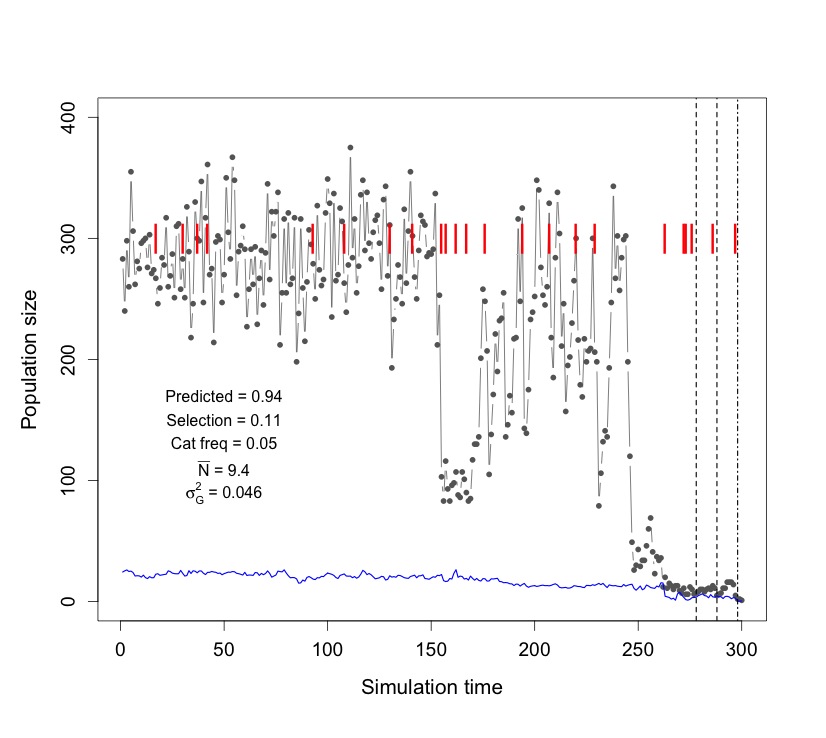 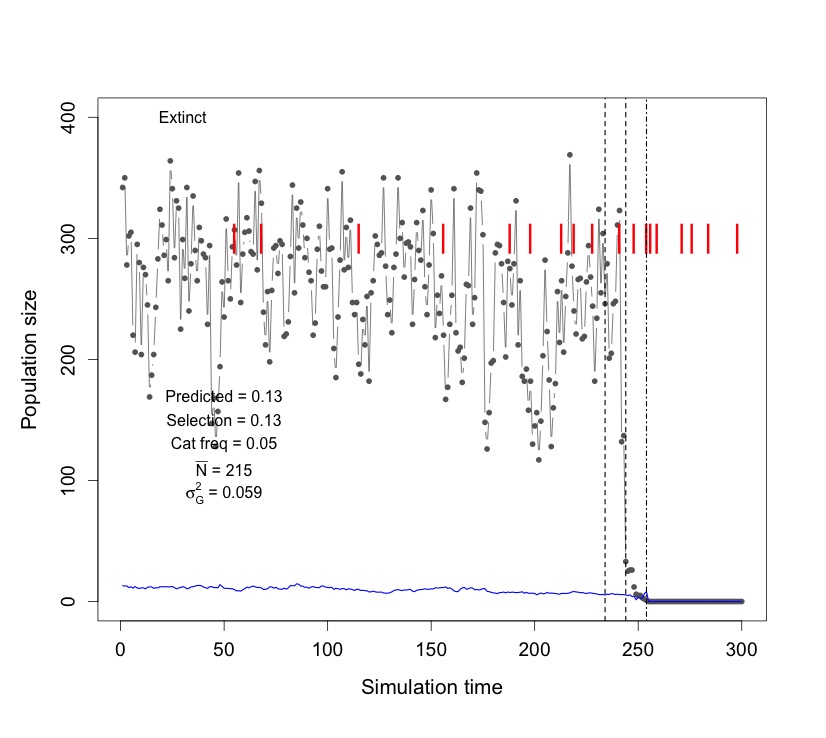 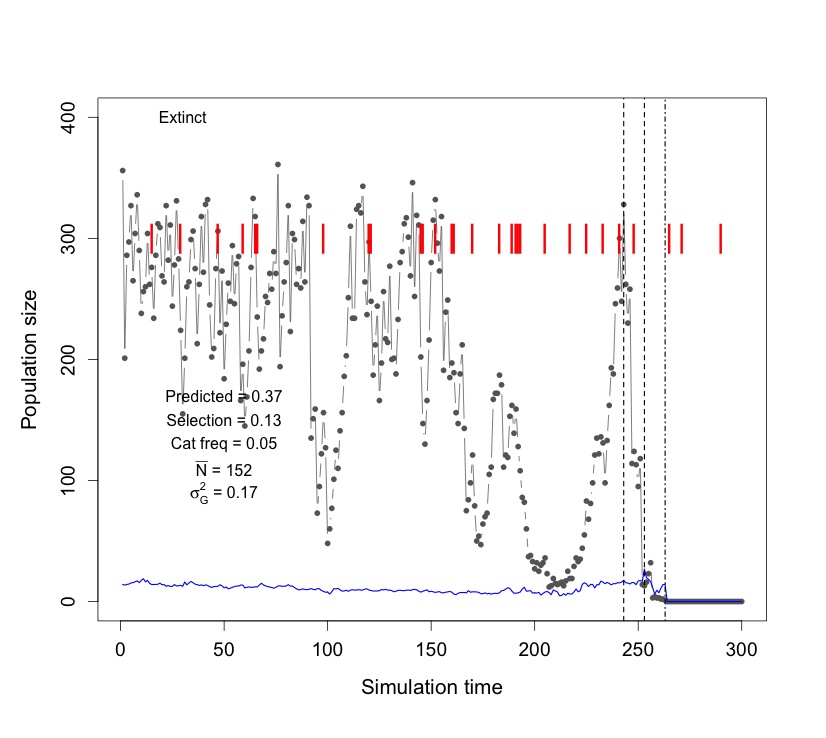 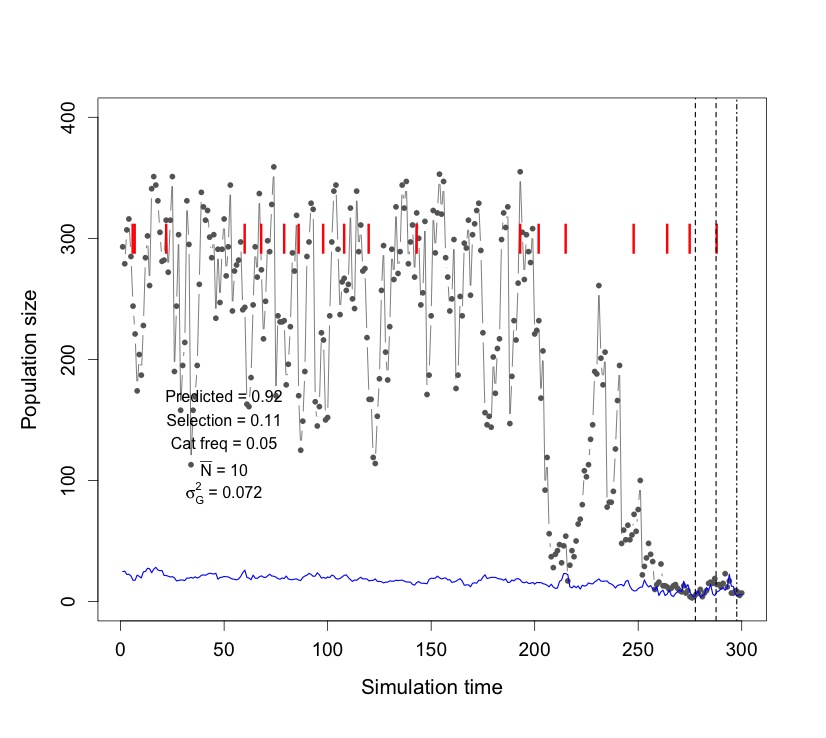 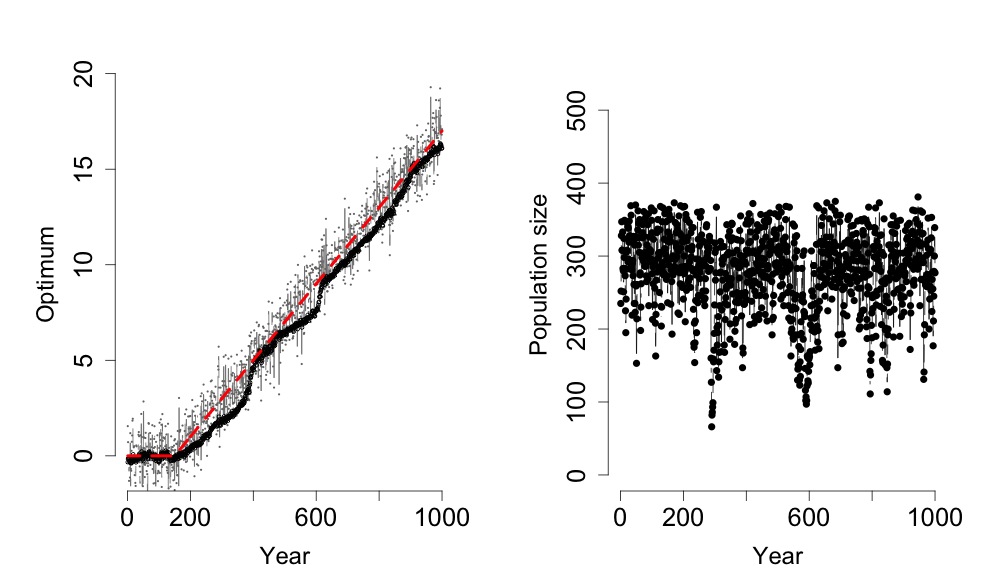 Figure ESM11. Left panel: Optimum (gray), mean of the distribution of the optimum (red line), and mean phenotype (black), with

= 0 (no increase variability over time), and p(EI,a) =0 . Right panel: population size over time. 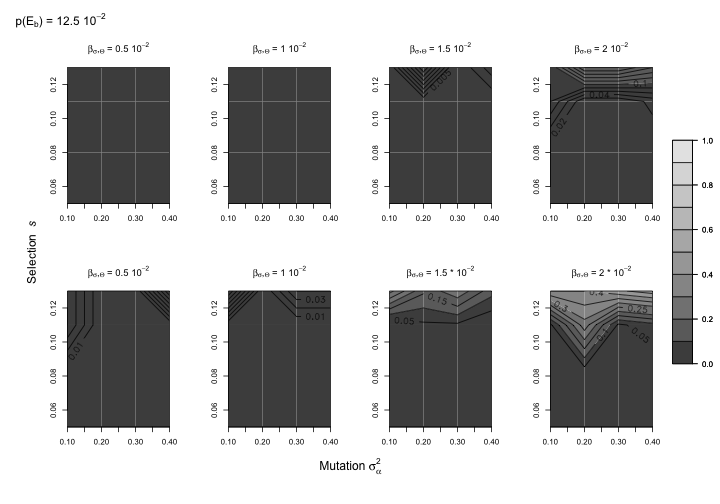 Figure ESM12. Lines of equal probability of extinction (number of populations going extinct divided by the number of replicates) in the mutation–selection plane with Poisson rate parameter for number of offspring produced by a mating pair for probability of point extremes p(EI,a) = 12.5 10-1 and the four scenarios of increasing variability over simulation time of the optimum phenotype  (


Figure ESM13. Partial R2 (for OLSs) and Wald Χ2 (for GLM) for predictors. a = time to extinction for the populations that went extinct (excluding the few extinctions that occurred before climate change, b = mean phenotype

at the end of simulation time for the populations that survived, d = extinction(1)/persistence(0). The hierarchy defined by partial R2 (for OLSs) and Wald Χ2 (for GLM) is consistent with the regression parameters.

Figure ESM14. Frequency of replicates with different strength of selection that went extinct with 0 (white), 1 (gray), or 2 or more (black) point extremes in the five years before extinction.

Box ESM1. Further details on the model of population and genetic dynamics.

The Monte Carlo simulation at a time t during the simulation proceeds as follows. I: (1) draw the optimum phenotype (t) from (t), (2) compute the annual survival probability of individuals by applying Eq. (2), and (3) determine the survival of individuals using Bernoulli trials. Then, I compute the total number of individuals alive N(t) and check the distribution of trait zztin the population. A population is considered extinct if at any time during the simulation there are less than 2 individuals in the population. Then, (4) surviving individuals form mating pairs and produce a number of offspring randomly drawn from a Poisson distribution with intensity (i.e. expected value and variance) equal to 2. I allow for full genetic recombination, which decreases linkage disequilibrium and tends to increase additive genetic variance (i.e. reduces the Bulmer effect, [1]). Offspring receive for the same locus one allele from each parent. Given a mutation (with probability nl, the locus of the offspring at which it occurs is chosen randomly. Finally, (5) offspring are randomly introduced in the population from the pool produced by all the mating pairs until K is reached, and the remaining offspring die.

= 0.3, and tinc = 25 years. For the other parameter, I chose range of values that are both realistic for natural populations and instrumental for the main object of the study, e.g. investigate the consequences of extreme events on population dynamics, risk of extinction, and evolution of a quantitative trait. I performed simulations for combinations of selection strength s from 5 10-2 (weak selection), to 13 10-2 (strong selection) [2]. For the rate of increase in the mean of  (i.e. directional trend) I used

of 1.5 and 3 at the end of simulation time, respectively. Per generation increase in the mean of the climate variable corresponds to 1% and 2% of the phenotypic standard deviation at time tch. This rate of increase should allow the population in absence of variability to persist almost indefinitely [3,4], and thus extinctions should not be caused by the effects of the climate trend alone. I used rates of the increase of the standard deviation of (i.e. climate variability)

reaches the same order of magnitude as the width

of the fitness function, the population is at risk of going suddenly extinct, with little role played by genetics. Therefore, I chose values of

that substantially increase the probability of climate extremes, but did not inevitably make the population go extinct. I used probabilities of occurrence of point extreme events p(Ea) from 5 10-2 (no variation before and after climate change, corresponding to a recurrence interval of 20 years) to 12.5 10-2 (i.e., recurrence interval is 8 years) with a step of 2.5 10-2 (Table 1). I used a moderate mortality caused by point extremes (

= 0.3) and moderate p(Ea), since with higher mortality induced by point extremes and higher probability of their occurrence the system will be largely driven by the point extremes, with no or little role of genetics. I used mutation amplitude a ranging from 0.1 to 0.4. This way the variance introduced by mutation per generation

, as suggested by reviews of empirical data [5,6].

The code, statistical analyses and figures were all developed/carried out/produced with R.

The following packages were used:

Each simulation takes approximately 33 seconds on a iMac with 4 cores (2.8 GHz Intel Core i7) and 16 GB or RAM. Simulations were run using parallel computation (8 virtual cores). 25 600 simulations took approximately 48 hours. Since it is quite common that virtual cores stop functioning, an error correcting routine was developed in order to check at regular intervals if one or more cores stopped working. If that was the case, the cluster was automatically rebuilt and the missing replicated were simulated again.

The code is available upon request, while a synthesis of the results and of the code to generate mean figures and results is available on figshare: http://dx.doi.org/10.6084/m9.figshare.706347

The potential results coming from each replicate are saved as a list and include, among others (vector = v, scalar = s, matrix = m):

alleles m. each line is an alleles and the alleles after row 100 are mutant present in the population at the end of the simulation

col 1 = value for the allele

col 2 = frequency of allele in the population at time 1

yearextinct s if == 299 the population persisted

fitness.variance v variance in fitness at each simulation step (adults)

popsize.pre v population size before selection and before that year catastrophe